MasterChef elimination of Courtney: So was it Mint or Spearmint? (17 May 2010) 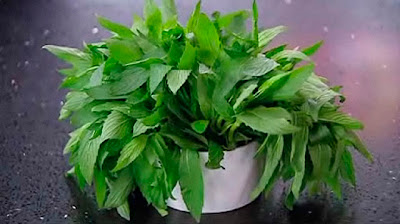 So was she right?
I unfortunately missed the MasterChef Quiz episode when Courtney Roulston was eliminated after being told by the judges that it was in fact 'mint' not 'spearmint' (pictured above). I've recently heard there's been plenty of household debate about this particular episode with many viewers believing she was in fact correct and that the judges got it wrong. There's also been many reader comments on MasterChef Mint news, and Herald Sun Speared by mint mistake giving mostly support to spearmint over mint.
I've done a little bit of my own research and searched for mint, spearmint and peppermint on the Coles online catalogue which is one of the MasterChef sponsors and found mint was the only fresh variety that comes up (see below) although it doesn't really look like the one they had on the TV show which had more elongated and serrated style leaves. If you do a search for spearmint (Mentha spicata) in Google I get the wikipedia description which notes it's native to most of Europe and southwest Asia. Searching for mint (mentha) provides a wikipedia description noting a wider distribution to Europe, Africa, Asia, Australia, and North America. If I was shopping for mint at the supermarket or fruit market I'd be asking for mint and not spearmint — I don't think I've ever asked for spearmint. But that's not to say that what we saw on the show really looks quite like how spearmint is described ie leaves are 5–9 cm long and 1.5–3 cm broad, with a serrated margin.
So I'm not really sure if she's correct or not but I guess MasterChef get the final say and what they think is right or wrong. Perhaps she was even more correct than the other two contestants because 'mint' is known as the genus or common name for apparently 25 species and hundreds of varieties and to simply call it mint is perhaps not technically quite correct. As one reader commented it's like calling a Holden Commodore a Holden.
Were the judges in fact wrong? And if so, should they actually now face their own elimination? What do you think? 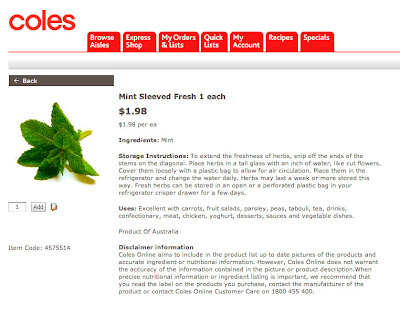 Hmmm..I saw the episode and immediately thought of lollies or gum when she said that! I believe it was a technicality and they were after the more common name. But you are right, Chef Simon-there are many varieties. Nothing like a bit of drama for a reality show!

Spearmint and common mint are two different animals (in smell and taste). I have seen them side by side in my green grocers. What was on the show, not sure (I did say mint in the family play along challenge), would have had to of had a taste and smell to be 100% certain.

My 'Royal Horticultural Society Encyclopedia of Herbs and their Uses' is at pains to make the point that identifying one mint from another is difficult, due to so much hybridisation of plants over the years. So anyone feeling a bit dogmatic about mint is probably standing on shaky ground, for starters.

This fine book describes peppermint (itself a hybrid of two other types) as "often purple-tinged" with "lanceolate, toothed" leaves (ie, leaves longer than they are wider, pointy at the end, with serrations down the side).

It describes spearmint (Mentha spicata) as also being called 'garden mint' and says it has "bright green, wrinkled leaves" whose shape varies from pointy spears through to ovals (as with common mint). It's the one most commonly used in cooking, and for making mint sauce, for example.

The photos in the book of the two types show they can sometimes be very similar in leaf shape, but the peppermint does have decidedly dark coloured stems usually.

In the pic in your blog I can't see the stems. But my bet is that if the stems are green, then it's spearmint. If they're darkish or purpley coloured, then it's peppermint.

Well, it ain't the first time they're embroiled in a bit of controversy, are they? From accusations of rigged cook-offs to ... using incorrect cookery terms to .. well, ridiculously inept pronunciation of either ingredients or food items or names. Especially when it involves guests on the show. Last year it was repeated mispronunciation of Adriano Zumbo's name (both Gary & that nosh-want-to-be-posh George) and this year Gary couldn't manage one of the most well-known chef's names in this country, Tetsuya Wakuda. Actually, coincidentally in both cases they just can't get past the 'u' in those surnames. How disrespectful and ignorant is that? Shame, people; shame. I was trés amused to see Matt acknowledging George's ignorance in the newspapers recently. Gobsmack'd

hi peter, they sure love the drama on reality shows. must be so much editing going on behind the scenes to make it as dramatised as possible.

hi sara, i've heard a few people say you need to be able to taste them to tell the difference.

hi jamie, i was wondering who might be able to refer to an encyclopedia of herbs. thanks for the extra info. i don't think anyone got to see the stems so perhaps we'll never know.

hi gobsmack'd, they sure are getting hit for inept pronunciation at the moment aren't they hehe i'd like to see the judges take on a few more challenges of their own set up by the contestants to see how they go. they certainly aren't coming off as the nice judges this year. i'm thinking they're getting a little bit too big for their boots and egos are flying high :-)