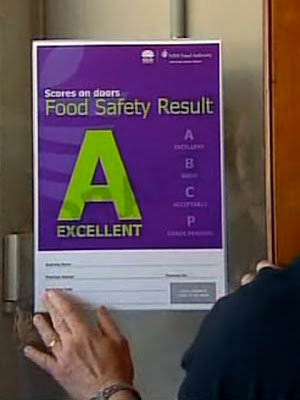 Just like singapore
Restaurants across NSW will soon be able to participate in a new 'score on the door' food safety and hygiene rating system. Primary Industries Minister Steve Whan apparently unveiled the new ratings at Skinny Dip cafe in Bondi which seems to already have a high rating of 8.0 on Eatability as a popular spot. I’ll need to check them out for breakfast me thinks. Mr Whan said the State-wide program would be an Australian first, although a similar system had operated at local council level in Brisbane.

Restaurants and cafes will be ranked A, B, C or P:
A = Excellent
B = Good
C = Acceptable
P = Pending
The only time I've come across such a food rating system was when I visited the hawker stalls in Singapore many years ago and noticed their food rating system of A, B, C and D. It seems Sydney is set to trial a similar system.
'An A is for excellent food standards ... (meeting) all the benchmarks for preparation of food, hygiene in their kitchen, handling of food, refrigeration at the right temperatures, good equipment and so on,' he said. The rating system will be trialled for six months from July 1 in 12 Sydney council areas before a State-wide rollout from July 2011.
I wonder how Hong Ha in Mascot and Shanghai Night in Ashfield would fair. They're always so popular because they're so cheap (and tasty), even though they've had a few food penalty notices given to them in the past.
Sourced news articles:
• Yahoo! 7 News
• ABC News
• SMH News
• Hospitality Magazine
What's your opinion of the new system as a customer or as a restaurant/cafe owner? Will it change your decision in where you eat or how you operate?

Email ThisBlogThis!Share to TwitterShare to FacebookShare to Pinterest
Labels: News

I've noticed our local BBQ duck place closed for a refurb recently, probably a lot of places are going to be doing the same thing under the influence of the ratings system. Should be interesting to see what happens!

I read this the other day in the paper and thought to myself that it would definately be interesting indeed.. I wonder what the difference between each grading would be as I think this is one criteria which needs to be clarified properly.

Have they announced which council areas will be trailled?

I think it's going to have the same effect that hat ratings have, on a much broader scale, as in people will avoid restaurants with poor ratings. I can't see places that have been pinged often willingly sticking the poster on their doors!

I'd like to see the restaurants in Cabramatta go through this, but it won't stop me eating there though :D

A cupcake or two said...

Wow this will certainly make restaurants step up their game. I cant wait till this hits.

Hmmm... I think the ratings are too kind - I would still eat somewhere if it was acceptable.. if it said something like "fail" then I'd be influenced. The ratings as it stand don't really tell me anything.

hi yaya, quite possibly it might be related or it could just be a coincidence. i think most places which get an A will display and those that don't get an A won't put it up even though they are supposed to.

hi phuoc, i think A means it passes everything and B slipped on on something and C would be a few things need to be corrected. in the end i think customers will just look out for what gets an A and be prewarned for anything that gets a B, C or P. although if your favourite eatery got a B or C I wonder if this will change your mind in eating there. I think Canada Bay is one of the trial areas as per news articles. not sure which others but curious to know.

hi celia, i'm skeptical about restaurants putting up a B or C unless it's enforced. they'd probably hide it somehow from public view behind a plant or something.

hi howard, i'd be surprised if many cabramatta restaurants would make an A. i wonder if they are on the test suburbs. Ashfield would be another place I think needs a shakeup.

hi FFichiban, actually food court places would be a perfect place for this system although I'm doubtful any of them would get an A. thankfully our stomachs get well trained.

hi a cupcake or two, i think most quality restaurants would get an A but it's more the cafes that might need to be more aware of how they do things.

hi trissa, i agree there still needs to be some more information about what each level is. although if you were in chinatown and spotted an A, B and C outside 3 different restaurants I'd be inclined to go for the A restaurant. i wonder if this will also start being a price indicator as well.

‘Scores on Doors’
I think it is a wonderful idea, they have been doing in other parts of the world for years. Food poising incidents improved dramatically when they bought into Singapore, and that's what we want, no more food poising due to lack of hygiene in our eating establishments. As a consumer and an avid diner I am exceptionally happy to have ‘scores on doors’. I have a professional cleaning Company that specialise in ‘deep cleaning, sanitising of restaurants, I couldn't share with people some of the filth I see in kitchens. Fortunately with ‘Eat Safe Brisbane’ majority of my clients received a high rating, knowledge goes a long way. Look at the statistics in other states and countries. It is about time, good on you Sydney, NSW gov. for doing this, it is a big project. Consumers can look forward to healthier, happy, safer dining.
UK have had ‘scores on doors’ for awhile now, it is working well especially with the on line directory, it’s as simple as looking it up to find a rating before stepping out to eat.
Australia, especially Sydney are huge in the restaurant and tourism industries, let’s show our visitors we to, are careful with Hygiene and health.
It’s fairly easy for eating establishments to par take, they have to follow the criteria of the ‘Food Safety Act 2006’, which every eating establishment is required by law to have a food safety supervisor officer at their premises, these people have been trained in the requirements needed. Every eating establishment by law has to be licensed. With ‘scores on doors’ this may weed out a few dodgy ones. . There are 2 sections, Compliance to food safety requirements and Good Management practices, which is keeping records and logs, this is very important.
When the directory comes out let’s hope all eating establishments are listed with their rating (score), otherwise not fair if only the high achievers are , we’ll never, never know where not to dine or purchase take away .
From one careful diner and Hygiene cleaning specialist.
John Bretherton Xsteam Clean Brisbane

hi john, thanks for the very comprehensive comment. it must be very scary seeing what goes on behind closed doors of restaurants. thanks for dropping by :-)

Here in Brisbane we have the star rating that is rapidly coming in to force. Unhygienic food vendors should not be allowed to exist in the first place anyway.