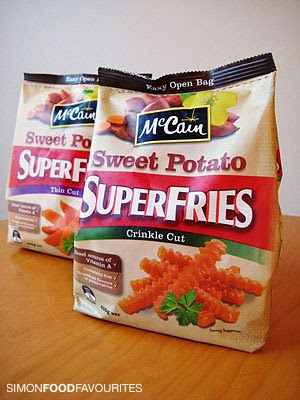 Yes, they are orange chips
Thanks to Sophie Hohnen from Fleishman-Hillard for approaching Simon Food Favourites to try the new McCain Sweet Potato Thin Cut and Crinkle Cut Superfries. I've heard that sweet potato is possibly healthier than potatoes and also has less carbs so I was keen to give them a try. The easy open bag lived up to it's name and had perforations that easily tore apart where they should — very well designed. Now, the cooking instructions says 'Preheat oven and baking tray to 230ºC (210ºC fan forced) for 10 minutes' which for me I read as once the oven is turned on for 10 minutes you then put the chips in, even though the oven might not have reached 230ºC in that 10 minutes but my dad thought it should reach 230ºC first and then wait 10 minutes before putting the chips in. I ended up trying both ways and it pretty much provided the same result in the end but I'm tending the think the hotter the oven the better. Perhaps I'm the only one that finds this instruction a little unclear?
If you're not a fan of sweet potato then you probably won't like these anyway. I'm not a huge fan of sweet potato myself but I love crispy potato chips. Unfortunately I wasn't able to achieve a very crispy and crunchy chip as they tend to suggest in the TV ad I saw during MasterChef. Nevertheless they do taste like sweet potato and my family and I tended to prefer the thin cut over the crinkle cut due to looking more natural and ended up having slightly more crunchy bits. After my third cooking attempt over the weekend I've grown more use to the taste although I think I'd like them more if they had a really good crunch factor as well which I expect from chips — perhaps a super thin cut style would help achieve this. I'm also wondering what I'll be able to achieve if I bought a sweet potato and made my own fries to compare.
DID YOU KNOW
Apparently potatoes are known as the foods people crave when they are stressed because the carbs in potatoes help make space for tryptophan with a smooth passage into the brain. This, in turn, boosts the serotonin level in the brain. High serotonin levels help boost your mood and help you feel calm.
SNAPSHOT REVIEW:
PROS: Good source of Vitamin A, Sweet potato supposedly healthier than potato, Easy to cook, Convenience, Will probably satisfy sweet potato fans, Cholesterol free
CONS: Didn't turn out as crispy and crunchy as the TV ad suggests
MUST TRY: To cook freshly made sweet potatoes using the cold oil method to see how it compares to the McCain frozen ones
— 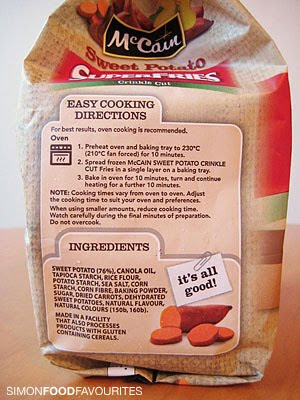 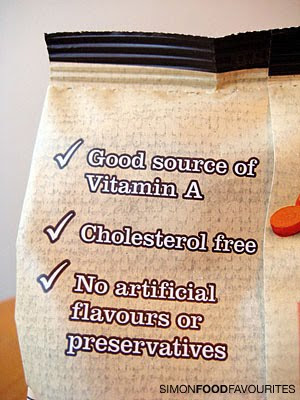 Good source of Vitamin A 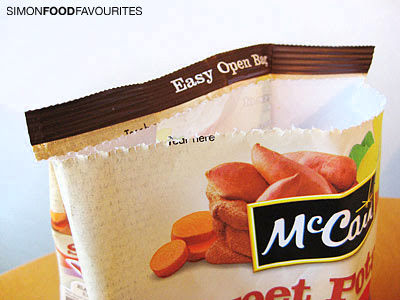 Easy open bag lives up to it's name 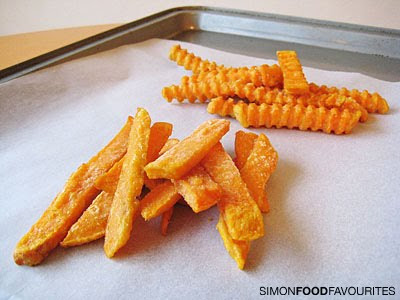 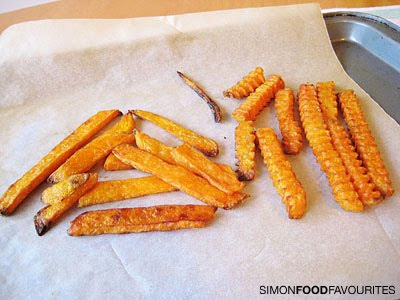 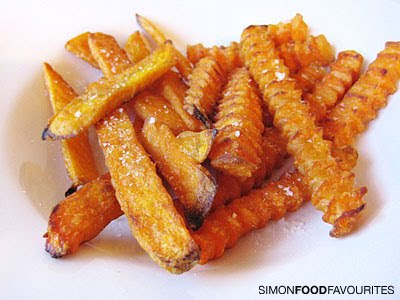 Serve up — I added some salt

I dont know how or why you were not in my reader but you are now so I wont miss a single delectable post.

I love that sweet potato fries are becoming more popular, I've recently become obsessed with them.

I bought the crinkle cut ones a while back and I found them a good alternative to normal chips. A little expensive but not bad.

mmmm carbs make me feel so calm and serene, especially if they're mixed with a good dose of fat and salt or sugar! Sweet potatoes are lower in GI than potatoes so take longer to digest and make you feel fuller!

Shame they didn't crisp up. The Counter in Crows Nest serves sweet potato fries which were very crispy from memory.

Maybe try deep frying them or adding duck fat to the pan before it goes into the oven? Or does that defeat the purpose of having a low carb, cholesterol free snack. =P

Oh yeah!! I saw the ad and really wanted to try them! So thanks Leong! Love sweet potato, much healthier than potatoes in my opinion. Bananas are also good for serotonin levels.

I saw that ad, but wasn't quite convinced... I think I'd prefer freshly prepared ones from a restaurant/cafe. Thanks for sharing your roadtest! :)

hi doggybloggy, glad to be back on your reader now :-)

hi lorraine, honesty is the best policy as they say.

hi laura, i like how they're healthier than normal potato. i used to hate pumpkin when i was young but i've learnt to enjoy the taste now and sweet potato is a relatively new vegetable for me so still getting used to it.

hi joey, did you manage to get them as crunchy as you'd liked too?

hi yaya, carbs with far and salt or sugar oh yeah but the falling down after can be pretty bad.

hi lobo, i'll have to visit The Counter one day. sounds good. hehe about the duck fat. i think that would defeat the purpose of having them in the first place.

hi sarah, i LOVE bananas. i pretty much have one for breakfast every morning. so quick and easy.

hi ladybird, i still have to try and make them from scratch one day and see how crispy i can get them.