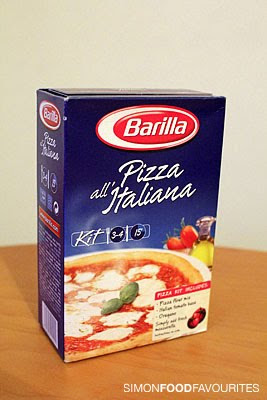 Not as successful as hoped

Thanks to Barilla for sending me a product sample of their new Barilla Pizza All' Italiana Pizza Making Kit. I’ve always been quite apprehensive about making my own pizza bases which Jamie Oliver seems to do so effortlessly and thought this Barilla pizza making kit would be the answer to my fears — but sadly it seems to have only made things worse for me. I’m either the worst cook in the world who missed something very critical in the instructions or this pizza making kit is supposed to be as messy as it ended up being for me.

Advertised as taking just 15 minutes to prepare it took me about that long to get my head around the instructions and arrive at a stage of feeling very frustrated with my hands covered in sticky pizza dough. I think the main discrepancy I can see in the instructions is once you’ve added all the ingredients into a bowl it says ‘coat your hands in a little oil and knead the dough mixture for approximately 3 minutes’ but the contradicting illustrative instructions shows a hand holding a fork and mixing the ingredients in a bowl. When I tried to mix and knead the ingredients with my hands it just became a big sticky blob of relentless frustration and nothing like the clean-handed diagram that places the final dough on the tray.

There were no fun times ahead when trying to spread the dough onto the baking paper provided. Trying to flatten the mess from my hands into any respectable pizza shape was near impossible due to the stickiness — swear words ran freely in plentiful supply. I could only imagine the worst for the fate of this pizza and thinking it was destined to be a bin disaster. When time came to add the included can of tomato pulp there was twice as much as I could fit on my thick base. The sprinkling of oregano included in the pack was the easiest part but the two tablespoons of extra virgin olive oil on my smallish sized thick base seemed excessive so I kept it to about only one. After ten minutes in the oven the base seemed firm enough to add my sliced mushrooms, salami and mozzarella cheese. I gave it a further ten minutes cooking time instead of five due to my pizza base being so unfortunately thick to make sure it was cooked.

Finally taking out the pizza for cutting I was thinking which pizza shop I’ll be calling if my attempt was inedible. Thankfully the base was cooked, it had a slight crunchy base and held its shape well when picked up. The taste was respectably OK although the consistency was not as fluffy and soft as you might get from a pizza shop but it was certainly better than I was expecting and decently edible. In the end I think I’d prefer using a ready-made base that you could simply add toppings rather than trying to make the base which doesn’t appeal to my simple cooking policy (and laziness) in the kitchen. It looks like I’ll be continuing to use Lebanese bread to make my homemade pizzas for a quick and easy dinner.

I’d be curious to know if anyone else has had better success than my awkward attempt at using this kit and if indeed I have misread the instructions.

SNAPSHOT REVIEW:
PROS: Tastes OK in the end but would prefer a ready made base to add toppings to avoid the messiness in preparing, Tomato pulp and oregano included in the kit along with baking paper
CONS: Highly sticky and messy in preparing, Not as simple and easy as I first thought it would be
MUST TRY: Finding an easier and cleaner way of making pizza bases
— 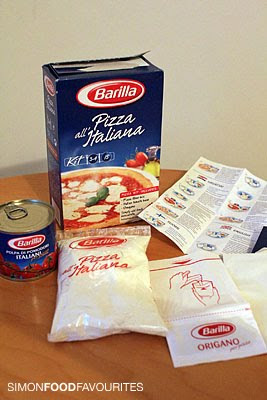 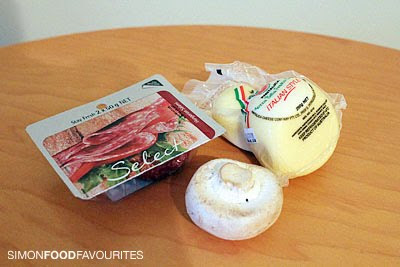 A few toppings for my pizza 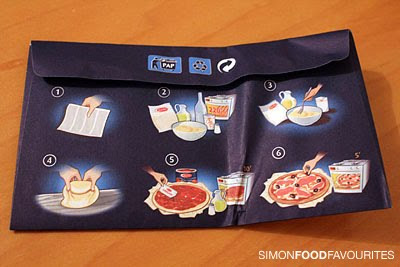 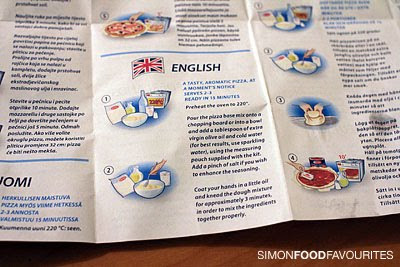 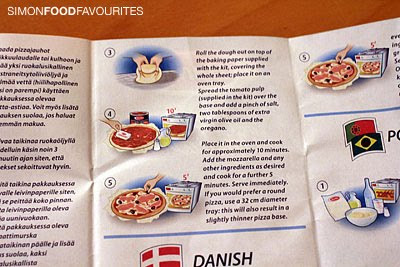 The illustrative instruction with captioning 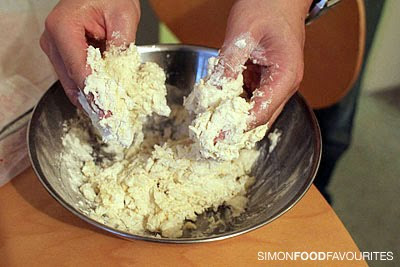 Mixing the dough mixture with my lightly oiled hands as instructed 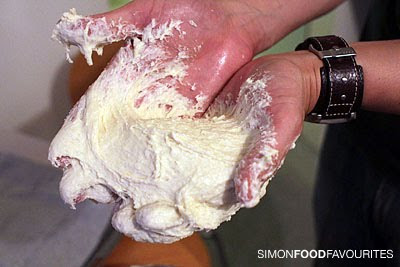 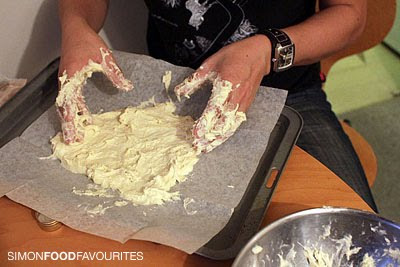 Attempting to make my pizza base — I think I just got the award for the worst looking pizza base in the world, where do I collect my certificate! 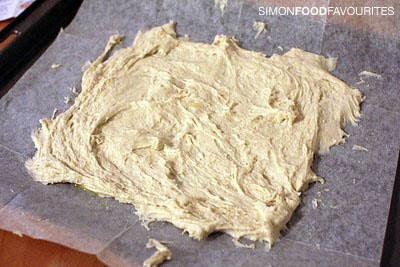 Yep, that's my pizza base which was impossible to make any thinner, let alone round 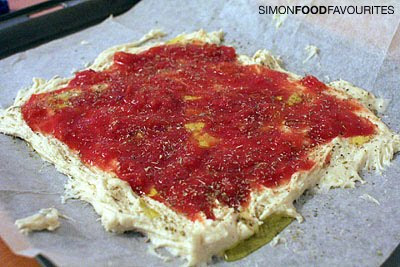 Pizza based topped with tomato pulp, oregano and olive oil 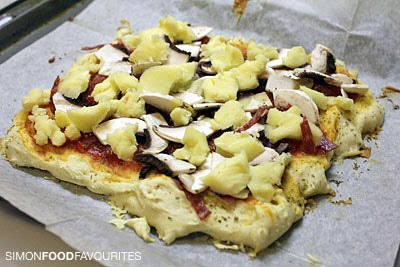 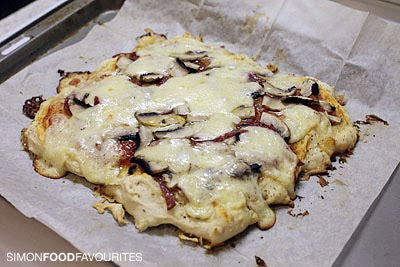 Pizza cooked for a further 5-10 minutes 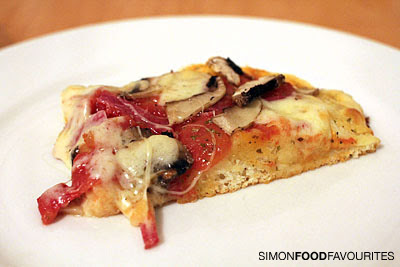 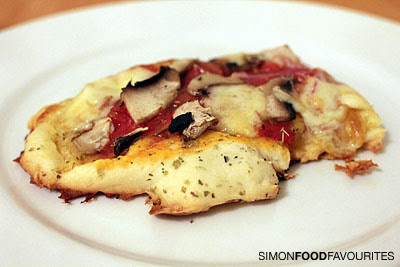 Hehe, this is funny! I think you either have it or you don't when it comes to pizza dough (I definitely don't). And who took the pics, since your hanss were so sticky? End result looks ok/edible!

I have always been apprehensive about pizza dough, although it looks like you may have too much water in there for it to be so sticky.

OMG that looks like pizza batter, not pizza base!

I use a failsafe recipe from Pete Evans - can send through if you need ;)

Oh my, it looks like you had a struggle there.

I quite enjoy making my own pizza bases from time to time. I have never brought a kit, but just use bread flour and a sachet of dried yeast.

Your dough looks very wet, you should be able to spin it (impossible I've found) or roll it out with a rolling pin.

I also think the secret to a good pizza at home is using a pizza stonem, otherwise you just can't get a nice crispy think base.

That is SO what my pizza base would look like if I tried to cook one. I use Lebanese Bread - less tears in our kitchen that way.

I've been wanting to try home made pizzas for a while, but as a beginner, I think I'd like to use a ready made base. Any suggestions on good brands to try out?

hi bel, it's always good having someone else around to take photos which i did at the time.

hi susan, i think you might be right but i followed the measured amounts.

hi tina, hehe i felt like it was at the time. please do send through the pete evans recipe.

hi richard, thanks for the tips. if you have a good recipe please email to me as reference.

hi misspiggy, i generally use lebanese bread too. works every time with no mess :-)

hi pristine, i'm still searching for the perfect ready made base myself :-)

I love this product!!!

hi Anonymous, sounds like you've had much better success than me in using it.