Thanks to Georgia Gilson from DEC Communications and Tony Melhem from Coco Cubano for inviting me as a guest to sample the cocktails and tapas at the Cuban-inspired bar and cafe. Nearly nine months has passed since I visited but the place still remains as one of the prime locations in Taylor Square for people watching. I'd strongly suggest trying to grab a seat on the raised deck level. Not only does it have a better vantage point but you'll also feel a bit safer if the local crazies start singing to you with an unbuttoned shirt. There's a good variety of mojitos to choose from but it's hard to go past the original Mojito ($13.90). I noticed the Sangria by the jug ($28) was a popular choice around the tables. Large slices of fruit make it easier to pour and you don't end up with small bits of fruits that generally get stuck in your glass. I'd skip the Blueberry & Vanilla Cosmopolitan ($14.90) which reminded me too much of the taste of Benadryl cough mixture and try the Ray King of the Valley ($13.90) instead. Simple flavours of Barcadi Superior with ruby red grapefruit juice and fresh lime works a treat although it's a pity you don't get much to drink and be careful it doesn't roll off the table.


It's probably a good thing the menu is tapas because the small tables won't really give you much room for your drinks as well, let alone your cutlery. I'd recommend the Grilled chorizo with warmed olives ($9.90) which were good and easy to eat with toothpicks and Fries with chilli salt ($7.90) although I was hoping for more chilli flavour. The Calamari, chilli salt and roasted garlic sauce ($12.90) were flavoursome and had a decent crisp coating. Grilled haloumi, charred peppers, capers and herbs ($10.90) unfortunately seemed to be more peppers than haloumi. I was hoping the haloumi would be the star of the dish like at The Spanish Fly. The Patatas bravas crisp potatoes with spicy tomato sauce ($9.90) was more like wedges with sauce on top and my least favourite dish of the night. Perhaps if the sauce was on the side I would have liked it better. For those with serious sugar cravings the desserts will surely push the boundaries. Revolution Waffle ($13.90) was smothered with strawberries, ice cream and chocolate — where's the waffle? Thankfully the Choc Cinnamon Churros ($13.90) was cooked quite well with crisp outer coating and soft inside. It would have been even better with a scoop of ice cream. Warm double chocolate brownie, chocolate sauce & vanilla ice cream ($13.90) was very decadent — only for the die hard sugar addicts as it was too much for me. 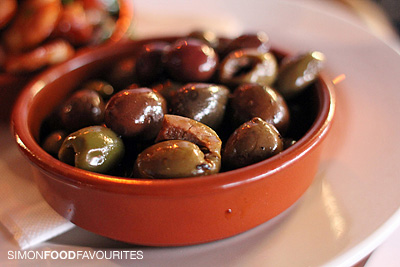 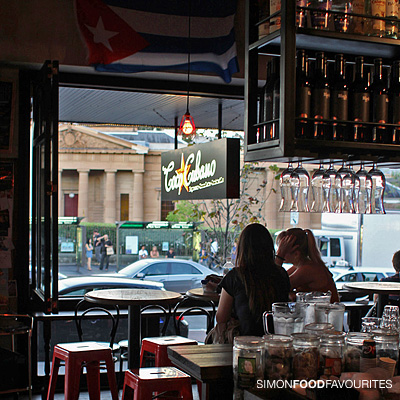 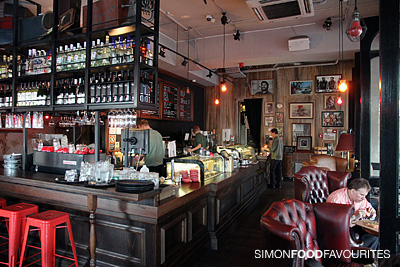 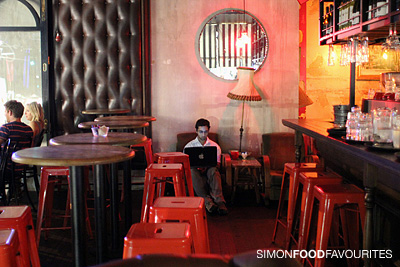 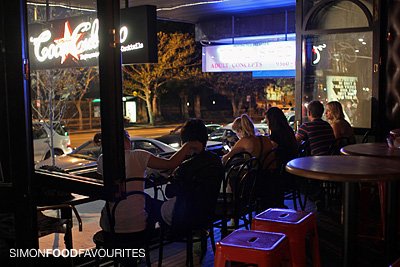 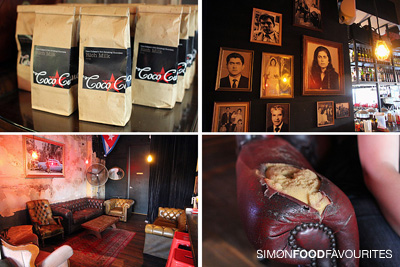 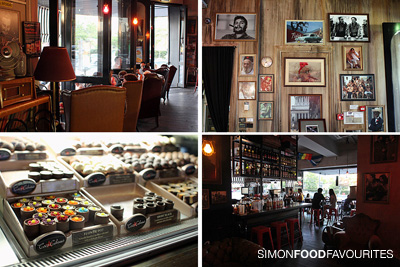 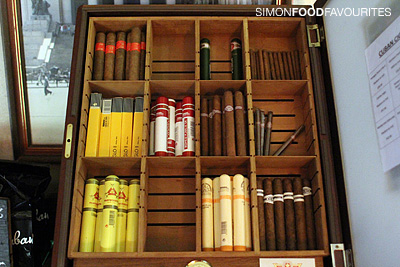 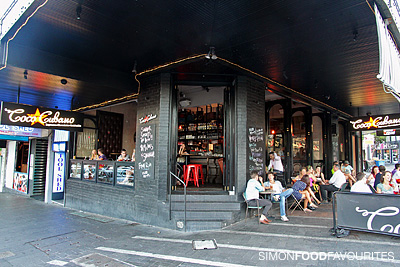 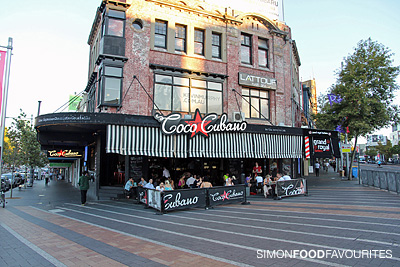 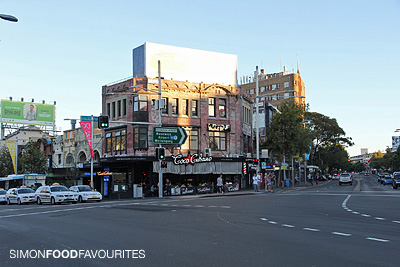 I only visited this place once for a drink, as you say it's a great spot for people watching.

Luckily I didn't attract any crazies, but like your tip of sitting inside! :-)

Not very Cuban, for sure. Thanks for the cough syrup warning :)

Those desserts actually look a little on the scarey side!

hi richard, i think the place is most popular for a drink as i didn't notice too many tables actually eating as well at the time

hi gaby, there's always a particular ingredient that usually tastes like cough mixture. i think it might be cranberry juice.