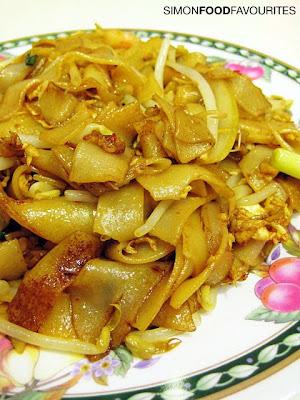 Hidden Cheap & Cheerful
This popular cheap and cheerful Chinese and Malaysian eatery is located in the Chambers Arcade which can be entered via Castlereagh Street or Pitt Street. This is the first time I've ever stumbled across this arcade and it was only my chance coming back from a lunch at Sea Bay Chinese Dumpling. It certainly has its fans with a constant lunch time traffic and with bain marie prices of $5.50 (small) and $6.50 (regular) I can see why as it won't break the bank. Today I try their cooked to order Char Kway Teow ($7.80) which they prefer to call Kwai Du on the menu. It's not as darkly coloured as Yummy Chinese but it's still got a bit of char factor — although more would have been nice. There's small amounts of prawn, chicken and sprouts amongst the rice noodles and there's a yellow tinge to the dish or is that the strong fluorescent lighting above making it glow? For the bargain hunters the bain marie leftovers become $4 take away containers which are snapped up by the late office lunchers. Even thought the shop name reminds me of the word 'wonky' the service isn't and seems to run quite smoothly.
Other places tried for Char Kway Teow:
• 25 Jan 2012 - More More Cha (includes clams)
• 2 June 2010 - Wong Kee Fast Food
• 20 Jan 2010 - Yummy Cuisine
• 19 Oct 2009 - Sayong Curry & Laksa Malaysian Cuisine
• 2 Sept 2009 - Chili Hub
• 16 Aug 2009 - Albee's Kitchen
• 13 Aug 2009 - Jaya Malaysian
• 29 April 2009 - Malay-Chinese Takeaway
• 17 Nov 2008 - Little Singapore Restaurant
• 19 Oct 2008 - KL Kopitiam Malaysian Cuisine
SNAPSHOT REVIEW:
PROS: Cheap and cheerful, Popular, Quick service
CONS: Limited seating in arcade with unnatural lighting from above, Questionable authencity
MUST TRY: Other menu items to compare
— 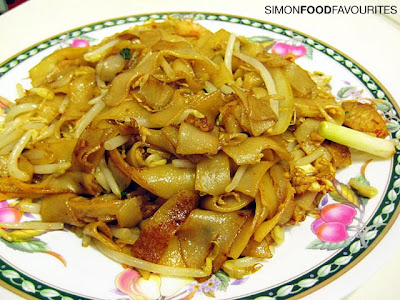 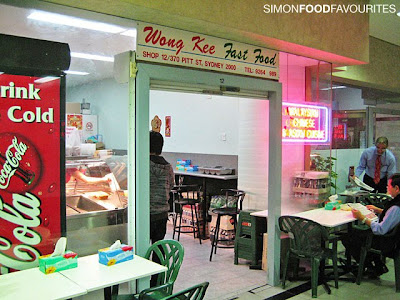 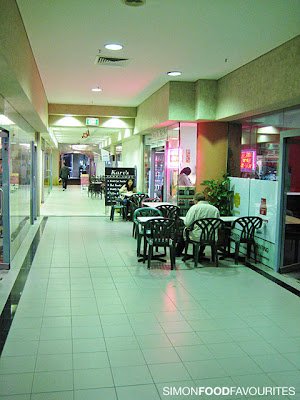 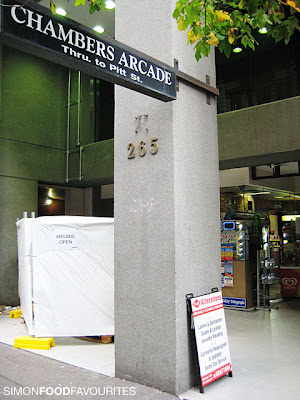 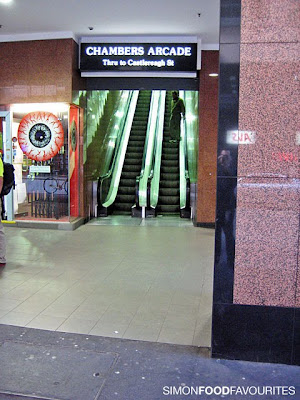 Looks interesting. I might take a stroll up here one lunchtime!

I need to take a leaf out of your book and get a bit more adventurous with my lunches. I seem to go to the same places in Hunter most days.

Geez I haven't walked through this arcade for over ten years. It's places like this that solely rely on local workers and the odd lost tourist!

hi richard, there's so many little arcades and hidden shops in the city to be discovered and it's up to us to find them all :-)

This one's a popular lunchtime favourite with our office too. Surprised you found it!

hi forager, what do you recommend i should try? next time i'm visiting i should see if your free to join me for lunch there :-)

You simply MUST try the Laksa - as a connoisseur of laksas around Sydney, this is the best in my view!

hi mog, actually i have tried the laksa but hadn't had a chance to post about it. they were quite yellow but might have been the lighting as well. wasn't too bad but still prefer Malay Chinese. have you tried them?